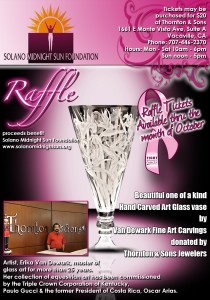 Raffle tickets are available through the month of October and can be purchased for $20.00 at Thornton & Sons in the Nut Tree Village:

Elizabeth Fry and Debbie Wood spent weeks successfully fighting breast cancer with the help and support of family and friends.
The two Vacaville women, who fought the cancer recently but at different times, are keenly aware that they were fortunate to have resources and support during one of the most difficult times in their lives. They also are aware that early detection allowed them to undergo the most noninvasive treatments.

Now, both women say they feel driven to do something for other Solano County women and men who face the disease.
They’ve formed the Solano Midnight Sun Foundation, a nonprofit organization created to assist Solano County men and women fighting breast cancer, and are partnering with NorthBay Healthcare foundation to provide free mammograms to low-income Solano County residents. The women view the partnership as creating an additional resource important in early detection.

According to the American Cancer Society, 230 Solano women will be diagnosed with breast cancer this year.

Fry and Wood were diagnosed in the early stages of breast cancer, which allowed each to undergo a lumpectomy instead of a mastectomy. Early detection also is associated with women’s survival rates. According to the American Cancer Society, the five-year survival rate for women is more than 95 percent of the cancer is confined to the breast.

Wood had her first mammogram at the age of 30 after being told she was susceptible to breast cancer due to her family history. She returned each year for the procedure and always had negative results until a year and a half ago. Wood received a letter on Christmas Eve 2002 stating she had breast cancer, and she completed treatment in March 2003.

Fry had her first mammogram a year ago, at age 42. Although she should have begun having annual mammograms earlier in life, the timing was right. Fry was diagnosed a few weeks later.

“I thought. ‘I have no family history and have no reason to think I could have breast cancer.’ ” Fry said. Fry completed treatment in February 2004. “The hardest thing for me was to feel as though I was making the right decision. For the first time in my life, I felt like I couldn’t make a good decision….It was scary,” she said.

Donations from fundraisers also will assist local men and women experiencing financial hardships due to breast cancer. Wood said she met numerous women too exhausted to return to work as bills increased. The women plan to receive referrals from breast cancer counselors and ultimately will make the decisions as to who receives funding.

One hundred percent of donations will be used to help others. The ladies do not plan on hiring administrative staff and have said anyone who wants to help the foundation will donate their time.

“We are going to be very accountable to all of our supporters.” Fry said.